A Couple of Things It Took Me Years to Figure Out or D'oh! 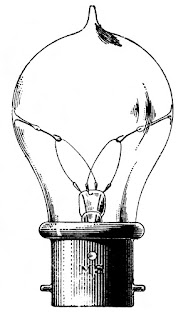 My preferred morning bus stop on my way to work is in full sun in the morning.  The Queen Anne's Lace and Cornflowers  in the flat gravel lot love it, but I do not.   Today, I was vexed because I just missed one bus and the next was not due for 20 minutes.  I steamed a bit contemplating the squinty, itchy wait.  Then, I had a brainstorm!  If I stood across the non-busy street next to an overshadowing building, next to a leafy tree with arching branches, I could check my phone from time to time and see the bus approaching.  I saved my skin 20 minutes of being baked in the golden, hot, humid, August sunshine.  I could appreciate the cloudless blue sky from lovely, cool shade.   I saw the bus after a comfortable interval, was able to cross and board in a blissful state.  What a luxury!  I felt like a genius and a champ!

Another story of clever realization:  After a few years in a new work location, tired of suffering while crossing 2 busy streets with trafficked by lawless, rabid drivers--another brainstorm rained down hard! On my way to my preferred afternoon bus stop, I figured out I could avoid the stress and near misses.  Often it is hard to tell if drivers see me or not.  I wait until I make eye contact before I step off a curb. Now, leaving the building, I veer right, instead of left at the start, walk on an overpass and across a plaza bypassing those 2 streets.  I have only 1, instead of 3, streets to cross to my bus stop and be homeward bound.

I'm a little mad that it took me a long time to figure our each little bit of ease and convenience.  These discoveries will save on so much stress and dread. 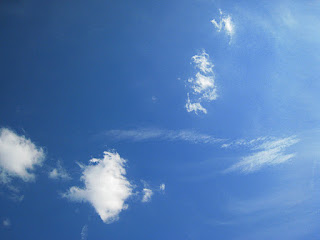 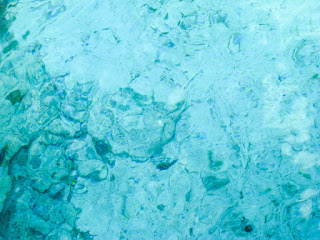 Wishing you blue skies and aqua waters and moments of clarity.###
Posted by tess at 10:00 PM No comments: Links to this post


I was incredibly sad when I found out actor, Bruno Ganz died.  He played a favorite role in one of my favorite movies, the angel Damiel in Wim Wenders Wings of Desire (1987). A link to  a still from the movie follows.
bruno ganz/ wings of desire

Damiel was an angel who falls in love with a trapeze artist and wishes to become human to be with her.  It was my fondest wish to be known fully and loved for myself.  So romantic.  Such a fantasy.

Sometimes I don't know myself.  I was clearing out a drawer at work because it wouldn't stay shut anymore.  I was surprised as I started pulling out many dried, clean, crumpled paper towels and napkins.  Why were they there? How did they even get there? What was I doing accumulating so very many?  I collected a very full plastic shopping bag to take home.  We have a glass "candy jar" of napkins such as these to mop out grease from pots and pans before they are submerged in soapy water.

I realized the napkins were from wrapping plastic ware I washed up at work.  When they were dry I would put the whole batch in the drawer.

Another a favorite artist from the film is Nick Cave.  Here is a scene from the movie featuring his songs.
nick cave wings of desire

Dear daughter, Wisteria: Whatcha doing?
Me: Making muffins, want to stir?
W: You're a real mom!
Me: (laughing) What do you mean?
W: you bake, you cook, you do laundry.
It's not a bad thing.
If you only could do hair...
Posted by tess at 2:55 PM 4 comments: Links to this post

Once Upon a Time I Wrote a Long List 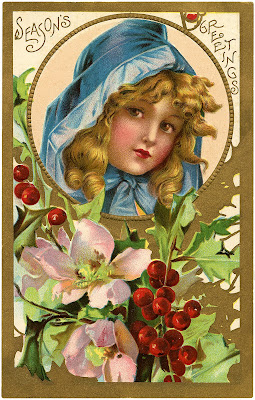 I wore a powder blue dress with airy pleats and velvet flowers.

I smashed an orange brick to powder, sprinkled on my brother, and declared him a carrot.

I found packets of photographic chemicals under the eaves of the attic and strongly contemplated eating them.

I smashed vintage tin trains as flat as can be with a brick, I then threw them away in the trash can in the alley because I became afraid.

I stole a quarter and ran with exhilaration to the corner store to buy white bread because I never ate Wonder Bread before.   Snuck to the back of the closet to ball up and eat all the pieces.

I woke up at night in my nylon blanket in a corner of my room.  Weird feeling.

I learned to identify edible mushrooms in a forest.

I tried to avoid wearing glasses.  My dad tested my eyes by pointing to dates on the calendar.  I quickly counted the blurs and gave him the correct answers.  Optometrist said my eyes were clear as glass but nearsighted.

Classmates made fun of my cats eye glass, hair, teeth.

I thought dolls came alive at night.  I was scared of being awake when that happened.

I pulled my 6-year-old brother up as he was sliding down a muddy, slick bank of a swollen, churning creek.

I put salt instead of sugar into a pitcher of tea.  I did not admit I did it.  There were plenty of other suspects present.

I was paraded from classroom to classroom by school principal who announced--this is the kid whose dad just died.

I was not paying attention and principal hit me in the head with a big, heavy book.  Later she and the pastor married and moved to Florida.

At the lake, I gave my name and address to 2 boys who then harassed me.

I was short 17 cents to take train home.

I was pickpocketed from an open bag as I squeezed past teens at back door of bus.  Figured out a week later.  Pickpocketed from pocket of pant on crowded bus. Saw giant hand reaching into petite lady's pocket. Warned her.

Mother and aunts handmade down comforter as anticipated wedding present,  I did not marry that person.  I noticed he spelled my name wrong on birthday card.

I did not marry man who could not remember my birthday in seven years.

I did not marry guy who clambered aboard bus ahead of me.

I got an email at work not to drink the water as it was compromised.

Email ThisBlogThis!Share to TwitterShare to FacebookShare to Pinterest
Labels: once upon a time, stream of consciousness

Finding the hidden. Fallow moment at work, trimmed plant leaves, looked at shelf--undated yellow legal pad.   First page takes me back 20 years to planning our wedding.  List starts with church which was under renovation (so plastic sheeting and scaffolding was part of décor), banquet hall/crystal room for 200 people, painted blue roses on ceramic centerpiece, guest priest--archdiocese had trouble verifying his credentials, DJ brought many protégés.  In reception hall I was by myself greeting guests, husband pressed in to service elsewhere.

Wilton party favors--had trouble remembering if/what I might have ordered, but each cost $5.35.  Maybe silver-toned picture frames?  I kept one for us.  Picture of dear husband in jean jacket and black hair circa 1994.

Amazon Dry goods catalogue $17.00  I wonder if I was considering a dress pattern or shoes?
Toshiro, Hubba Hubba Vintage--now closed.
Laura Ashley with a crossed through number--disconnected.
Jessica McClintock, asked bridesmaids to buy sky blue prom dresses from there, difficulty in finding one for everyone.  Maid of honor found a coordinating one, some relatives body shamed her for going braless.

I found my wedding dress at I Do Consignment, still in business. Tried on one lacy dress that fit like a glove.  But fell in love hard with a 1940s satin dress originally made for super tall and super thin bride.  Top was remade by seamstress with a sailors collar.  Material take from long training tail.  She made up veil as well.  Very pretty but fittings stressful.  Probably would have been just as happy with the lacy one.  Left behind pair of gray leggings from Contempo which I missed.

Went to consignment shop as dress I previously ordered from overseas was disappointing.  Built around a bra that wasn't even my size.  My head was so turned around I didn't refuse it and paid for it to long lasting regret.

Reserving block of rooms for out of town guests--not used as downstate relatives made 12-hour round trip without sleepover.  So many guests--a number of them have since passed away, multiple cancers, heart attacks, old age.  A number passed from acquaintance.  I remember being panicky when my mother and husband's mother each made list of guests that exceeded capacity.  The painful process of whittling down.  Husband and I each broke out in boils, in hidden spots at least. Torrential rain on reception night with flooding, leak in hall roof, elevator and bathrooms out of order,  guests read love poems under umbrella.

Lucky rain tradition in Brazil.  Lucky for us. Lucky in love.
Posted by tess at 12:30 PM No comments: Links to this post 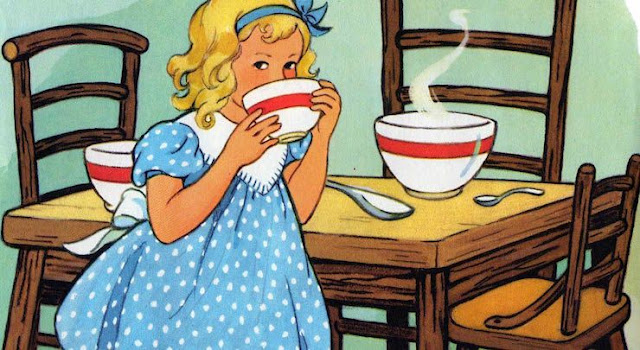 About 10 years ago, my dear friend M gave me a nearly complete set of Franciscan Earthenware  called Tulip Time.  Through clumsiness, carelessness, and general attrition, a creamer bit the dust  as did a number of the medium sized dishes we used most often.

I was tired of seeing the sad spot where the creamer wasn't. I found online sellers and happily replaced the creamer.  I was nervous about the dwindling stack of our dinner dishes.
I ordered 4 online.  They came in a big, well packaged box.  Too big as it turns out!
One person's dinner dishes are another's chargers.

I tried again.  Another big box containing 4 small dishes, too small! More like dessert-sized.  I was surprised as I thought I read each description carefully.  I didn't send anything back as the postage was about the same as the cost of the items.

So now we have a stockpile of our least used pieces.  Dare I try ordering again?
I saw that a company specializing in replacement offers a measurement to the quarter inch in their descriptions.  Maybe that will turn out just right?

Oh,Tomatoes and Other Garden Delights

In the back garden on P St, since some of the nectarine orchard died back, sunlight has flooded into our sunken garden, making an ideal place for growing tomatoes. My mother and aunt start tomato seedlings in March.  Such a tender miracle to see the seedlings hatch out of their wee husks. We optimistically plant out the little things mid-May. Bury most of the stem to encourage strong roots. The transplants never look like much in the soil. So very tiny. Each set off with a ring of crushed white egg shells. We hope that they make gains between rainstorms and marauding bunnies.  If the current year is like the year before, soon the fill form a near impenetrable jungle.

As they grow, we tie off the vines to long stick with bits of rag cloth.  My mother has a bundle of cloth strips labeled "best ribbons."  She washes them after each season, dries them in the sun and saves them for next time. She also washes the poles for disease prevention purposes.

My mother's chief garden joy is wall-to-wall tomatoes. I like a variety and can not say no to flowers and elements of intrigue.  Over the years, I added wild ginger and tiger lilies from a friend's mother, ferns and phlox from my mom, beloved hostas from many sources, a hydrangea from husband's work, lady statue that was a prop in a clothing store, trumpet vines that took 7 years to settle in and no time to run rampant. A curly willow branch from a dumpster-dived wedding arrangement is a 2-story tree.

Posted by tess at 5:00 PM No comments: Links to this post 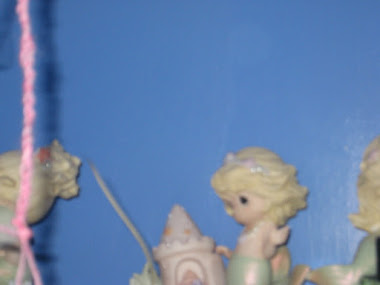